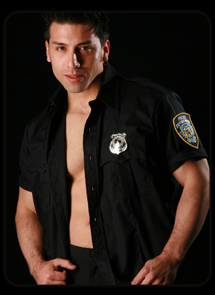 If we ask you what the classic male revue show is, what will you say? Probably something about dressing up and roleplaying. But roleplaying as what? While there are many staple costumes, such as firemen, cowboys, military personnel, marines, etc., perhaps the most iconic one remains the policeman costume.

But why is that the case? Why do so many people feel like the policeman roleplay is the ultimate stripper show? It doesn’t matter whether or not we are talking about a gay show or a bachelorette party, policeman strippers are one of the most requested. Today we will see why! But before that, be sure to check out our male strippers and book them if you want a show!

Authority Turn Us On

There is something about humans that is very interesting – we are turned on by people in a position of power. This by no means extends only to men in power. In fact for the majority of men a woman in power is just as hot. Do you think that is a bit weird? Well, here is why it isn’t!

Firstly, this behavior is not only found in humans. In fact it spans all across the animal kingdom and it has to do with hierarchy perception. Having authority means you are higher in the hierarchy, and who doesn’t want to get some with a person with more power that way? It is biologically sound – you get more food, you survive. So in a sense evolution has made us crave power – or people in a position of power.

Actually, your attraction may have something to do with social instincts. When you are in a group you tend to think like the group. And the group likes strippers. More so they like strippers in costumes. And it just so happens that a policeman costume makes for a good roleplay. After all they can engage you, they can arrest you, then can read you your rights, isn’t that so?

A policeman is in a natural position of interaction with you. Sprinkle some notes of authority and a hot body, and you have a recipe for stripping success. Think about it – how can a fireman interact with you? A pizza delivery guy? There is not a whole lot of inherent roleplay in that. The person has to go outside the role if he wants to engage you.

As you see, there is a simple explanation behind the desire for male strippers dressing up as policemen. The same can be said about cowboys, as they as well are in a favorable roleplay position. However, the appeal to authority there is less. So it is clear – the police costume is here to stay. Want to get a stripper dressed in it? Book ours!